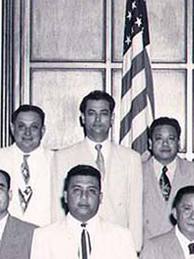 Manuel Ulloa Lujan was born on February 17, 1912 in Agana.  His parents are Carmen Olive and Manuel Lujan.  He was married to Mariana M. Leon Guerrero and they have four children:  Vincent, Rudolph, Ronald, and Raymond, including three reared children Leonard, Maria, and Ana.

His formal education included the following education institutions:  Guam High School, Normal School and as an extension student of the University of Hawaii.

Mr. Lujan had a distinguished career in public service.  As a senator from the 1st to the 10th Guam Legislatures, he held the following positions:  Vice Speaker from the 4th to 7th Legislature, Chairman on the Committee on Education and Labor, Vice-Chairman on Health and Welfare, member of the Committee on Education, Housing and Urban Development, Select Committee Multi-Media, Reintegration of the Marianas, Hospital Charges, Health Insurance and Airport facilities.

Other notable positions include:  Chairman on the first Grievance Board, Trustee on the Guam Commercial Corporation and Chairman of the Guam Chapter of the American Red Cross 1950-1951, Drill Master of the Post Office drill team 1933-1935.  Pre-War Scout Master 1933-1939.  In 1944, he organized the Guam Boy Scouts.